skip to main | skip to sidebar

Parsha Cake, Parsha Cake, open the parsha and see what you bake!
a place to post pics of my parsha cakes for my nephews & nieces & how I keep my kids busy. 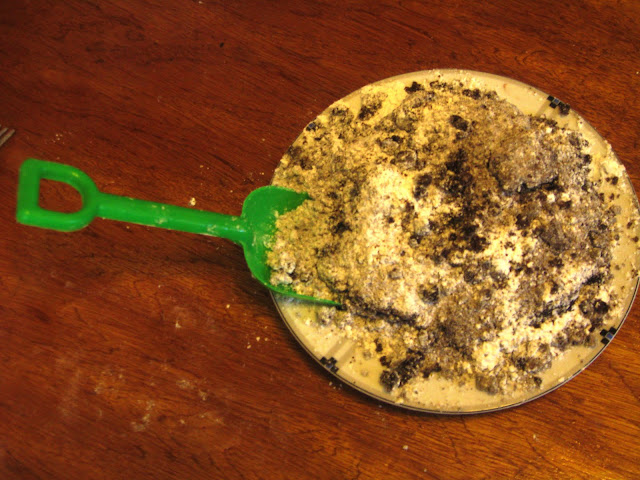 Terumas Hadeshen - Before the start of the daily service in the mishkan, one shovelful of ashes from the previous day's Korbanos was lifted from a mound of ashes and deposited next to the Mizbayach ramp. This was called the Terumas Hadeshen. ("The Kohen shall don his fitted linen Tunic, and he shall don linen Pants on his flesh, he shall raise the ashes which the fire will consume of the Olah-offering on the Altar, and place it next to the Altar." [Vayikra 1:3])

No. Today is the same Avodah as yesterday. As Rav Hirsch explains "The very last Jewish grandchild stands there before G-d with the same mission of life that his first ancestor bore."
Technique
1. Cake is Brownie Pesach Recipe
2. Formed ashes into a mound
3. Mixed Crushed Brownie with Confectioner's Sugar and sprinkled it all over the top.
4. Stuck in a kosher l'pesach plastic shovel 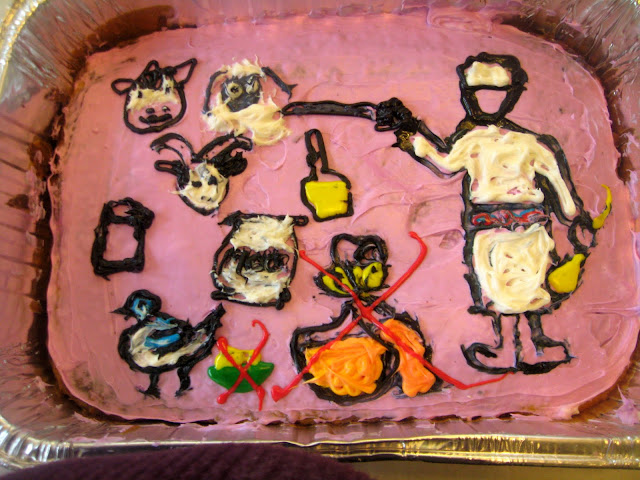 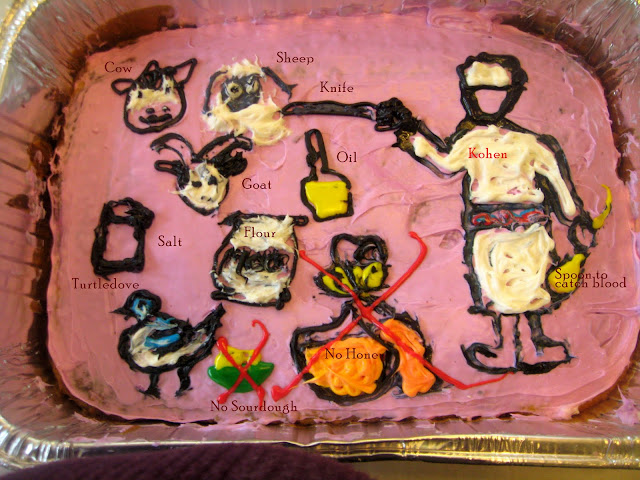 Explanation
The Korbonos in this week's parsha can be from Cow, Sheep, Goat, Flour & Oil Or Bird. Every Korban needs salt and cannot have sourdough or honey.

Technique
The cake is made from Duncan Hines cake.
Posted by Shira Hochheimer at 5:08 PM 1 comment: 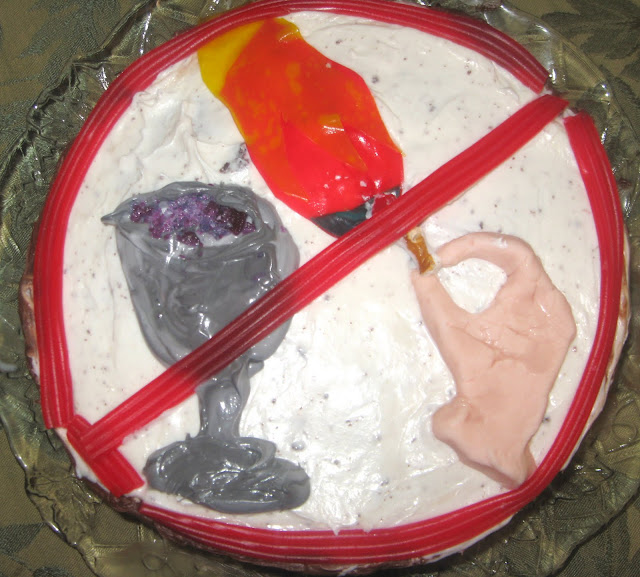 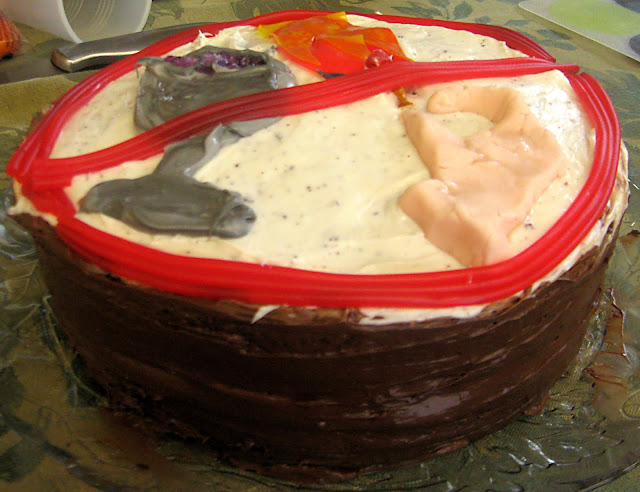 Explanation
לא תבערו אש בכל מושבותיכם - You shall not kindle a fire in all of your dwelling places.

On Shabbos - one may not light a fire or do any of the other 39 categories of work used to build the mishkan.
Technique
The cake is made from Duncan Hines cake. I  split the batter into 2 8-inch tins
Posted by Shira Hochheimer at 2:49 PM 4 comments: 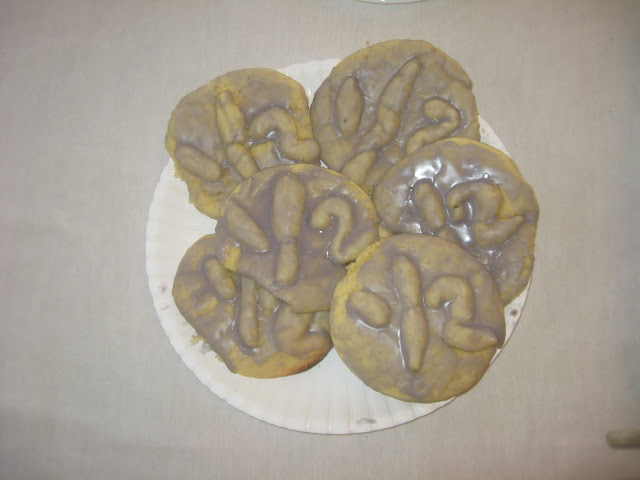 Explanation each male 20 and up was required to give a half a shekel. It was collected in Adar to be used beginning in Nissan
Technique
Made from the Sugar Cookie Recipe from Susie Fishbein's Kids in the Kitchen.  rolled out some of the dough to write 1/2 on the cookies.  Made Glaze from confectioner's sugar, water, and corn syrup. Dissapointingly, the black food coloring turned purplish rather than silverish.
Parsha Cake 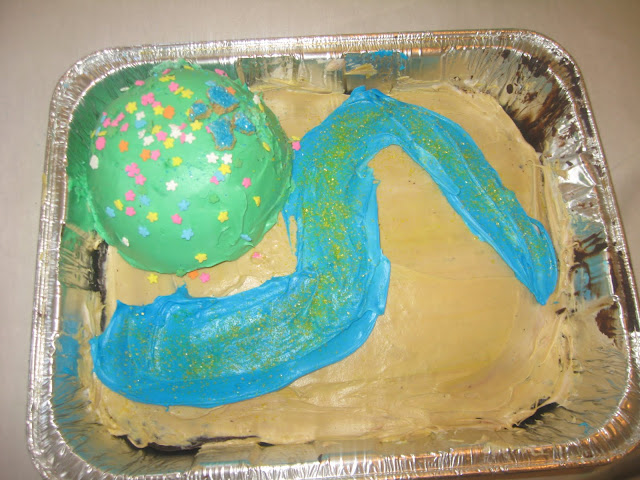 
After Moshe spent 40 days and nights on Har Sinai, he came down and saw the egel hazahav, the golden calf. He took the egel, ground it and put it in water for the people to drink

19 And it came to pass, as soon as he came nigh unto the camp, that he saw the calf and the dancing; and Moses' anger waxed hot, and he cast the tables out of his hands, and broke them beneath the mount.

20 And he took the calf which they had made, and burnt it with fire, and ground it to powder, and strewed it upon the water, and made the children of Israel drink of it


Technique
The cake is made from Duncan Hines cake. I  poured the  majority into 9x13 disposable tin and the remainder into a pyrex bowl and put both in the oven to bake.
After baking, both cakes were cooled in the freezer for over 45 minutes. I leveled the cake that was in the bowl with a knife.
The big cake was frosted with white frosting mixed with a spoonful of chocolate, a drop of yellow & 3 drops of green.
The water was made with white frosting tinted with neon blue food coloring.  I sprinkled yellow sugar crystals on the water to make the ground up golden calf.
Har Sinai was made with white frosting colored with regular green frosting. I crumb coated it first and then did a final layer. I used a paper scraped against the cake to smooth the frosting. I sprinkled flower toppings on Har Sinai. The broken luchos were graham crackers covered with frosting and blue sugar.
Posted by Shira Hochheimer at 4:55 PM 1 comment:

Shira Hochheimer
I believe good teaching is both a science and an art. I try to create materials so every student loves learning Torah and remembers what they learn.

Any comments, suggestions and feedback? Email Me!
-Shira